Lineages of the Present

The book brings together a selection of nine essays and lectures, and an inter­view, that the author has composed over a period of roughly fifteen years. Blending theoretical concerns with historical narratives, Lineages of the Present covers the main political con­cerns of our time: imperialism and nationalism; classes and ideologies; democracy, dictatorship and fascism. In a lengthy study of Maulana Azad, Ahmad reflects on the political limitations of the Muslim nationalist elite during the struggle for Independence, and challenges the well-known interpretations of Azad's politics and scholarship. In three overlapping essays, Ahmad offers a radically new reading of Antonio Gramsci, the legendary Italian Marxist who spent the last ten tears of his life in a fascist prison; reflects on the form fascism takes in those semi-industrialized societies which have powerful classical traditions in their past but have failed to make a social revolution after national independence, suggesting some fresh perspectives for understanding Hindutva; and develops the idea that the struggle in contemporary India is not merely between 'communalism' and 'secularism', but between socialist construction and fascism of one kind or another. The interview that concludes the book summarizes the author's thinking on a number of themes that surface in the book over and over again. Traversing national and continental boundaries, Lineages of the Present dissects a number of our modern pathologies from the perspective of socialist democracy.

Aijaz Ahmad is a Marxist philosopher, literary theorist and political commentator. He is currently the Chancellor's Professor at the UC Irvine School of Humanities' Department of Comparative Literature. Before joining UC Irvine in 2017, he was professorial fellow at the Centre of Contemporary Studies, Nehru Memorial Museum and Library, New Delhi and Visiting Professor of Political Science at York University, Toronto. He has published and lectured widely around the world. Aside from numerous essays in national and international journals, his publications include In Theory: Classes, Nations, Literatures (Verso, 1992; Oxford University Press, 1994), and Ghazals of Ghalib (Columbia University Press, 1971; Oxford University Press, 1994).

POLITICS/ POLITICAL THEORY |
Skip to the end of the images gallery 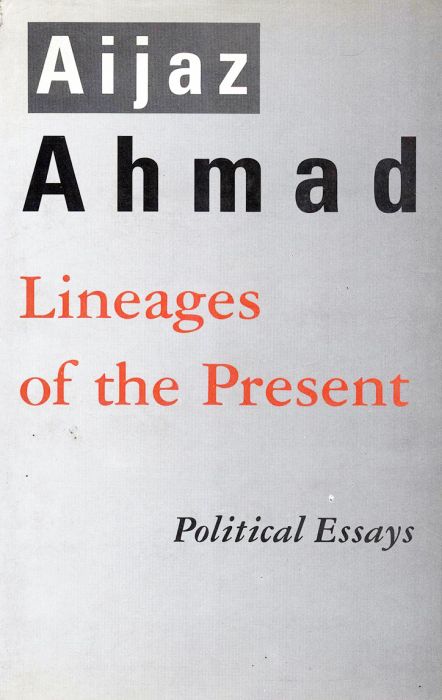