Such are the constraints of disciplinary boundaries that even when scholars come together in a collective effort to analyse recent processes, their focus narrows down to specific themes, invariably privileging one kind of methodological or conceptual framework over others. The present volume of essays – the outcome of a seminar, 'Changing Social Formations in Contemporary India', organized under the auspices of the School of Social Sciences of Jawaharlal Nehru University, New Delhi, in 2003 – represents an attempt to overcome some of the limitations of this trend. While acknowledging the strengths of in-depth analyses of specific phenomena, there is an equally strong need to critically engage with the different dimensions of recent developments in India since Independence, and especially since the 1980s and 1990s, by bringing multiple fields of expertise into play. Economists, political scientists, geographers, historians, sociologists and cultural critics have all contributed to this volume in significant ways. Taken together, these essays clearly demonstrate that India has entered a new conjuncture since the 1990s, quite unlike the era of development that preceded it.The volume includes essays on such contested concepts in contemporary India as democracy, globalization, the rural-urban divide, the city, migration, the middle classes, caste, community and gender identities. It thus sets out to name some of the most urgent sites of engagement for inter­disciplinary social science scholarship today

Mary E. John was Director of the Centre for Women's Development Studies from 2006 to 2012, and before that was Associate Professor and Deputy Director of the Women's Studies Programme at Jawaharlal Nehru University, New Delhi.

Praveen Kumar Jha is Professor of Economics at the Centre for Economic Studies and Planning (CESP) and an adjunct professor at the Centre for Informal Sector and Labour Studies (CISLS), School of Social Sciences, Jawaharlal Nehru University (JNU), Delhi, India. He has been a visiting fellow at a number of universities and institutions in Germany, China, Switzerland, South Africa and Zimbabwe, and has collaborated in research programmes with UN agencies, including ILO, UNICEF, UNDP and FAO. He has published widely on labour and agrarian relations, the economics of education and public finance. He is editor of Agrarian South: Journal of Political Economy. 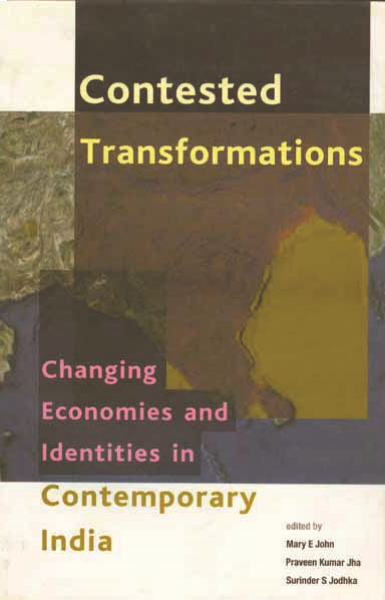