In Pliable Pupils and Sufficient Self-Directors, Barnita Bagchi examines writings that focus on female education and development by five representative British women writers who flourished between 1778 and 1814 – Lady Mary Hamilton, Clara Reeve, Elizabeth Hamilton, Mary Brunton and the early Jane Austen. In a climate in which female education was a subject of anxiety in print culture and fiction a site of contestation, and in which women were emerging as major producers both of educational writing and heroine-centred, ostensibly didactic ficition, these writers produced fictions of female education that were pioneering Bildungsromans. Highly gendered, these fictions explore key tensions generated by the theme of education, including the dialectics between formal and experiential education, between the pliable pupil obedient to pedagogical authority-figures and the more self-sufficient auto-didact, and between a desire for greater institutionalization of education and recognition of the flexibility given by distancing from established structures. Such fictions, Bagchi argues, are compendious and miscellaneous, encompassing diverse domains of knowledge, such as philosophy, politics and history. There is congruence between the ambulatory, tension-ridden patterns of female education found in these fictions and the distinctive, miscellaneous fictional knowledge they represent - their creators grappled with the epistemological and ethical status of fiction which they connected with female experience.

The writers of these fictions held conservative views on national politics, and categories such as gender, race and class are disturbingly aligned in many of their works. However, the author argues, as far as writings on female education concerned, the terms ‘radical’ and ‘conservative’ have limited use. Intrinsic to post-Enlightenment notions of education is a dialectic found in the very etymology of ‘education’, divisible into ‘ex’ and ‘ducere’: on the other hand, an element of control, found in ‘ducere’, and on the other, an outward pull towards freedom, suggested by ‘ex’. When, in an age of cultural and political revolution, gentlewomen wrote in the still upstart form of fiction about their own education, disjunctions and dialectics were stark. This freedom–control tug-of-war, according to Bagchi, should not be treated in a reductive way, and these women writer should not be straitjacketed as incipient subjects of an emergent hegemonic bourgeois order. Also, significantly, the journeys towards emancipation as well as the starkly disturbing closing off of many such possibilities in the writings analysed here, remain with us today as burningly alive issues.

Barnita Bagchi obtained a BA in English Literature from Jadavpur University, Kolkata, India, an MA from St Hilda's College, University of Oxford (where she was a Hewitt Exhibitioner), and a PhD from the Faculty of English, University of Cambridge. While at the University of Cambridge, she coordinated the Gender and Literature seminar. Since her college days she has worked actively with feminist institutions and activist organizations, notably the School of Women's Studies, Jadavpur University and Majlis, Mumbai. She is also a translator of Bengali literature into English. Currently a member of faculty at the Indira Gandhi Institute of Development Research, Mumbai, she teaches and researches a range of issues at the interface of gender, education and development in contemporary India, early twentieth-century Bengal and Romantic-era Britain. 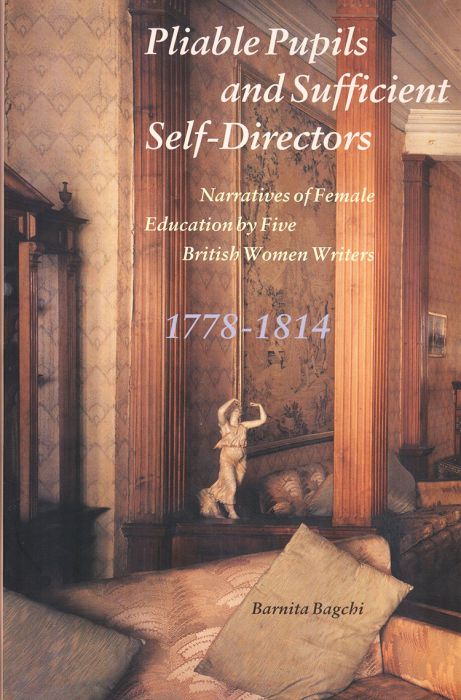