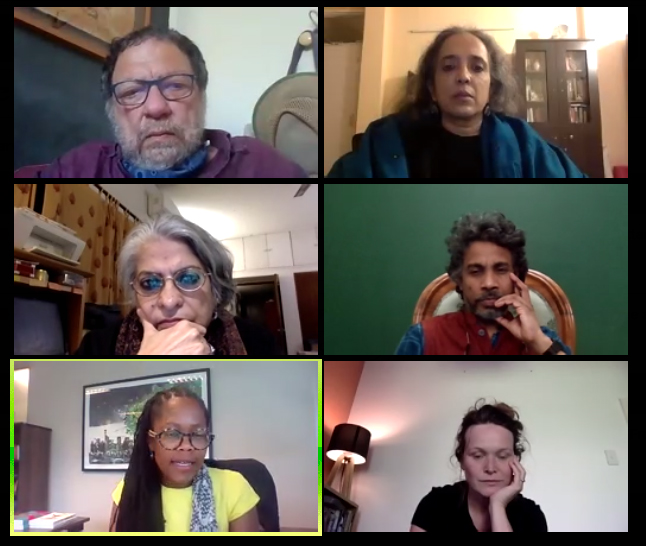 Notes for an Oratorio

on small things that fall (like a screw in the night)

An online event to celebrate the book was organised on 4 December 2020 with a programme of music, visual animation, performance and conversations, moderated by Sarah Mosoetsa. The participants included the author of the book Ari Sitas, Kristy Stone, Reza Khota, Anuradha Kapur, Deepan Sivaraman and Sumangala Damodaran. Here is a recording of the programme:

To avail a discount of 20% on the book, valid till 31 December, visit

The virus grows, mutates, multiplies.
The pandemic rages.
We carry on, regardless.

Just published!
Notes for an Oratorio
on small things that fall (like a screw in the night)
ARI SITAS
with Kristy Stone, Greg Dor and Reza Khota 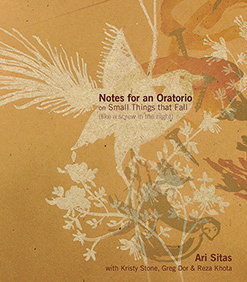 These Notes emerged as an outrage against my daily encounter with both the ugliness and wonder of our material and tactile worlds. They are a poetic, creative and sociological take on our contemporary Silk Roads and Hazmat highways – in a world of Daisy Cutter bombs and gadgets, refugee camps and refuse. Parts of the Oratorio’s libretto were staged by Anuradha Kapur and Deepan Sivaraman in Delhi in 2018, as Dark Things. The journey reconstructs a via dolorosa through the excesses and forms of exploitation, discrimination and suffering.

The Text, the arias, the intended soundscapes here are my desperate attempt to weave, to use the loom and frame to craft a musical narrative, a contemporary oratorio. I am delighted that my creative friends have responded in drawing, in composing and annotating to co-create this work. I am humbled that some have taken bits of this to classes and larger bits to find the visual poetry in theatrical form. I thank you that you have not allowed this to be commodified but touse it as a rough guide to some different kind of value.

Ari Sitas is a poet, dramatist, activist and sociologist. He was at the core of the transformation of Labour Studies, of popular and theatre work, and a range of cultural initiatives in South Africa. He has recently been awarded the highest honour bequeathed to South Africans for his scientific and creative work, the Order of Mapungubwe. In 2016, he was the inaugural Bhagat Singh Chair at Jawaharlal Nehru University, New Delhi, India. 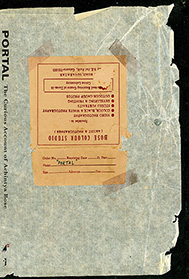 Portal: The Curious Account of Achintya Bose, conceptualized, compiled and reproduced by Shan Bhattacharya, recipient of the Umrao Singh Sher-Gil Grant for Photography, 2015 (instituted by the Sher-Gil Sundaram Arts Foundation), presents the personal diary of the owner of a small photography studio in Calcutta, India, maintained sporadically from 1994 to 1996, before his sudden unexplained disappearance. The diary is a fictional ‘found archive’ that contains his collection of photographic prints, letters, torn pages from books, newspaper and magazine cuttings, declassified police records, polaroids and print advertisements obtained from different sources. Through these documents spanning the twentieth century, he attempts to trace photographic ‘evidence’ and information about an elusive woman who seemingly does not age through a century. Mr Bose’s search is also a journey through the local history of vernacular photography and regional publications that reflect popular culture, politics, fashion, design, advertising and other iconography, and their transformations over time.

In this book, images serve both as the primary objects of interest and a narrative device. The cover plot interrogates the veracity of photographs – the way they are used as indices and evidence of a person’s existence in spatio-temporal reality. These images are staged in variously contrived scenarios, often taking cues from the several utilitarian subsets of twentieth-century photography–the wedding portrait, the convocation photo, the vacation/holiday photo, candid snapshots, product advertisements–as though taken by different fictional photographers using different image-making aesthetics, techniques and formats appropriate to the time/place/visual cultures that those prototypes historically belong to. Referring to the genre of historiographic metafiction, fictional text and visual elements based on real events and characters are introduced to enable this ‘found archive’ assume certain characteristics of a hoax.

Shan Bhattacharya, recipient of the Umrao Singh Sher-Gil Grant for Photography, 2016, is a self-taught photographer based in Kolkata, India, pursuing personal photography projects and occasional advertising and promotional commissions since 2011. He has briefly worked as the editor of the photography section in The Four Quarters Magazine, an independent art and literature quarterly published from Delhi. His previous bodies of work include Blow (2012) and Hiraeth (2013–15). In 2016, he collaborated with the Calcutta-based avant-garde jazz band, The Bodhisattwa Trio, to produce a small book of abstract photographs as a visual accompaniment to their last concept album, Heart of Darkness.

On our small, but growing and prestigious list of books on art and artists:

“... The art books we have published include essays by writers often coming from different disciplinary contexts, serious expositions and theoretical texts discussing and interacting with various aspects of the artists’ practice, besides reproductions of images of artworks, so that they do not remain solely at the level of visual documentation. ...
Our very first art book, Contemporary Art in Baroda, edited by Gulammohammed Sheikh, was published in 1997 – a volume outlining the lineages of what is informally referred to as the ‘Baroda school’.”
(From an interview with Indu Chandrasekhar by Critical Collective, November 2020) 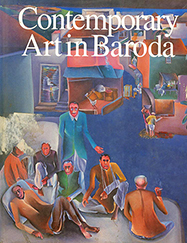 Books on artists that are specially designed, and which vary in structure and organization, include:
Amrita Sher-Gil: a self-portrait in letters & writings, an archival two-volume cased set, edited and introduced by Vivan Sundaram, designed by Sonal Jha. 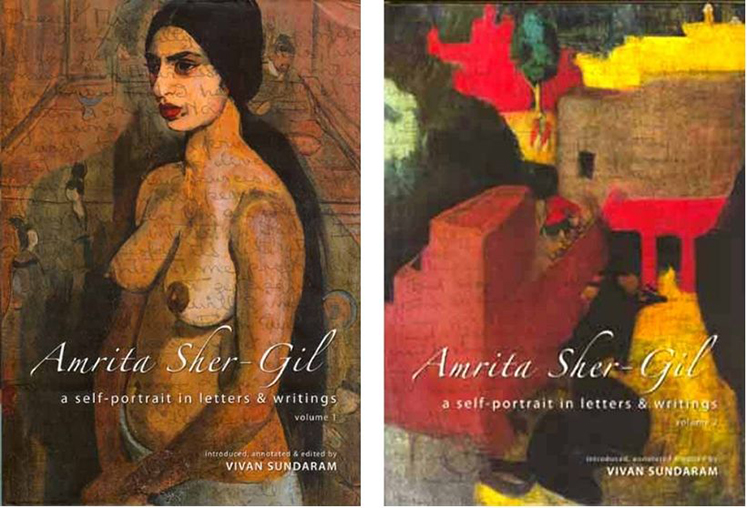 ... and on specific art projects/works of the artist Vivan Sundaram: 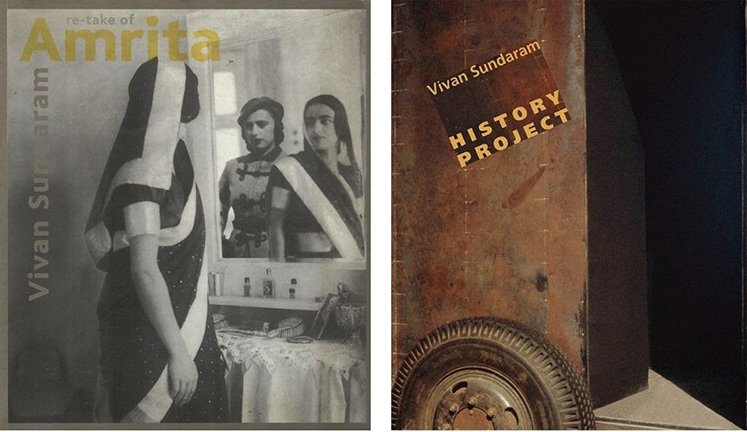 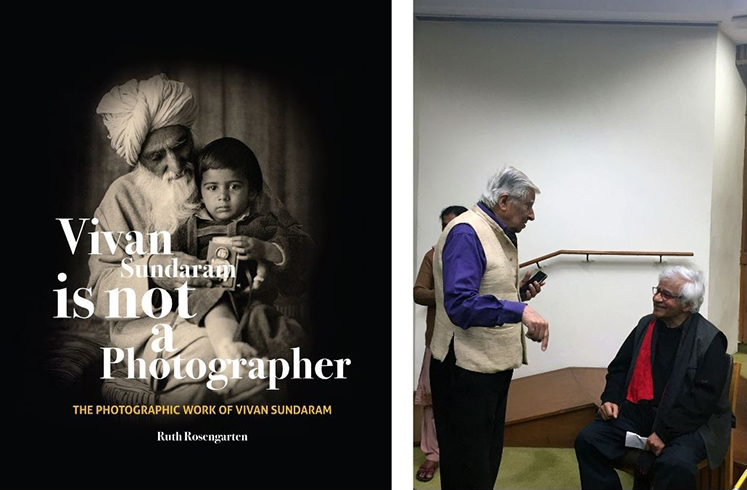 – all designed by Sherna Dastur 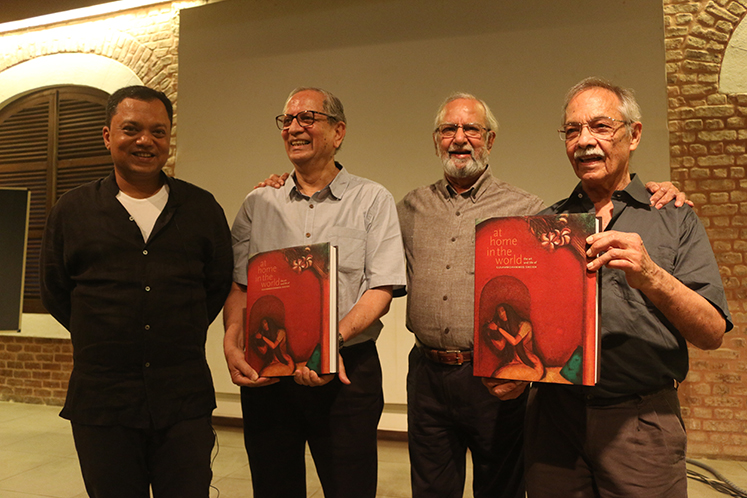 Left to right: Chaitanya Sambrani, Sudhir Patwardhan, Gulammohammed Sheikh and Gieve Patel, at the Mumbai book launch of At Home in the World

“I have always admired and valued books published by Tulika Books, long before I had any association with it. I was thrilled when Indu approached me to design a large format book on the works of Nilima Sheikh. ...
Books are usually conceived and developed well before they reach the design stage, which is often seen within the limitations of execution and production. With Tulika , the process of bookmaking is organic: design is seen as an intrinsic component in the conception of a book, and a space of trust and freedom is created for the designer which is extremely valuable. It allows one to experiment, take risks, develop methods of visual storytelling that complement the content and possibly even change the course of the book.”

Publications as an alternative site of art discourse...

“CC: To what extent do you conceive of publications as an alternative site of art discourse that might even be independent of gallery shows or the normal networks of exhibition? The volume Project Cinema City, for example, bringing together a host of essays and archival materials, and meticulously designed, could be considered one part of a three-pronged programme comprising exhibitionary, research and discursive components. In that sense, it does not necessarily follow the temporal logic of an exhibition catalogue, which often acts as no more than a notice of the physical exhibition.

IC.: This is precisely what we were trying to do, with clear intent if not a clear mandate to ourselves. We do not wish to bring out art books that replicate or resemble catalogues. The predominant form of art publications in India generally ... was the exhibition catalogue, which has a much shorter shelf-life than books, simply because they are directly linked to the exhibition they set out to document. ... Our books, even when they are developed around or deal with the specific exhibitionary practices of individual artists, have features, I believe, that extend them temporally to a longer life-span. The exhibition is not the only peg on which the book hangs. ... With ‘Project Cinema City: Bombay/Mumbai’, the books we published – one a smaller, somewhat quirkily designed (by artist Shilpa Gupta) volume (titled dates.sites) devoted to a timeline of the cinema and the city of Bombay/Mumbai, and the other a lavishly conceived and produced large-format volume (titled Project Cinema City, designed by Sherna Dastur) – were at once a component of and the culmination of a huge multi-arts project initiated by Madhusree Dutta and her team at Majlis, Mumbai. In the case of Vivan Sundaram: History Project, published almost twenty years after the artist’s architectural-scale installation was staged in Victoria Memorial, Calcutta, in 1998, the layout of the book evokes the exhibition through a recall of its itinerary with annotated images, through essays by cultural theorists and art historians, through cross-referenced shots from the video (Structures of Memory) that accompanied the exhibition, and a last section reproducing pages from the artist’s notebook relating to the realization of the project. So these books are all examples, we hope, of ways in which physical exhibitory events are lifted from the temporal limitations and logic of a catalogue.”
(From an interview with Indu Chandrasekhar by Critical Collective, November 2020)

An exciting collaboration that has recently opened up for Tulika Books is in association with the Sher-Gil Sundaram Arts Foundation (SSAF). A range of books on artists, the arts, cultural studies, including art-historical, critical and theoretical writing, are planned as part of this publications programme. So far two books have been published under the joint imprint: K.B. Goel: Critical Writings on Art 1957–1998, introduced by Shruti Parthasarathy with a foreword by Geeta Kapur; and Portal by Shan Bhattacharya, the first recipient of the Umrao Singh Sher-Gil Photography Grant (instituted by SSAF). Forthcoming publications include a book on the Kasauli Art Centre authored by Belinder Dhanoa, which contextualizes and examines the activities and events of the Centre for almost two decades, from 197, within the broader framework of the cultural scene in India; and a collection of writings by the artist Vasudha Thozhur, the first in a planned series titled ‘Documents of Art’, which will include writings by and on artists, resource books/manuals for practitioners in the various arts, conversations across forms and disciplines of art.

Details of the SSAF–Tulika Books publications programme are also available at http://ssaf.in/