While it is easy to blame globalization for shrinking job opportunities, dangerous declines in labour standards and a host of related discontents, the ‘flattening’ of the world has also created unprecedented opportunities for worker organization. By expanding employment in developing countries, especially for women, globalization has formed a basis for stronger workers’ rights, even in remote sites of production.

Using India’s labour movement as a model, Rohini Hensman charts the successes and failures, strengths and weaknesses, of the struggle for workers’ rights and organization in a rich and varied nation. As Indian products gain wider acceptance in global markets, the disparities in employment conditions and union rights between such regions as the European Union and India’s vast informal sector are exposed, raising the issue of globalization’s implications for labour.

Hensman’s study examines the unique pattern of ‘employees’ unionism’, which emerged in Bombay in the 1950s, before considering union responses to recent developments, especially the drive to form a national federation of independent unions. A key issue is how far unions can resist protectionist impulses and press for stronger global standards, along with the mechanisms to enforce them. After thoroughly unpacking this example, Hensman zooms out to trace the parameters of a global labour agenda, calling for a revival of trade unionism, the elimination of informal labour, and reductions in military spending to favour funding for comprehensive welfare and social security systems.

Rohini Hensman is a writer and independent scholar based in Bombay. She has published extensively on issues of worker's rights, women's rights and the rights of minorities, and is the co-author of Beyond Multinationalism: Management Policy and Bargaining Relationships in International Companies. 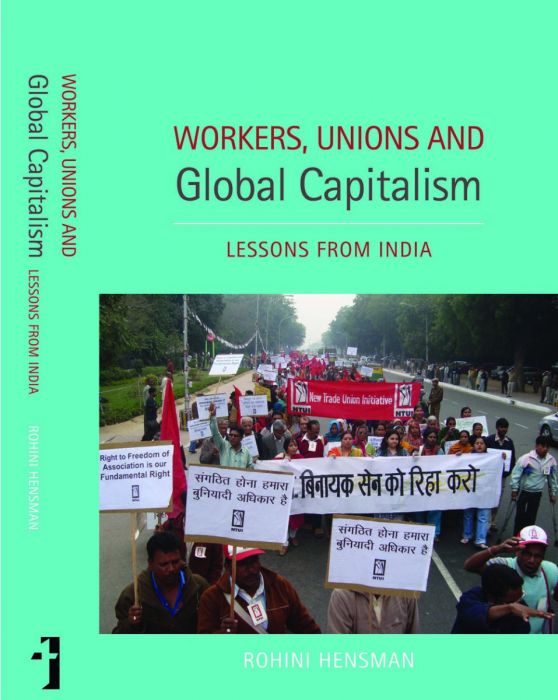 “Workers, Unions and Global Capitalism is a timely intervention on the important theme of workers’ rights under globalization. Rohini Hensman’s has been among the few voices on the left that has steadfastly refused to join the nationalist chorus against globalization – which for the left has become just another name for “imperialism”…. In keeping with her general stance, ROhini makes a powerful case for a global strategy for labour, though, she admits, this must not mean abandoning the local or the national as arenas of struggle."

“This is a provocative and refreshing book on the condition of the working class under globalization with special reference to India…. This book is a good example of ‘theory bursting intop praxis’ thanks to the author who is not only a scholar on labour issues but also an active participant in the labour movement…. I believe this book goes beyond the simplistic pro- and anti-interpretations of globalization and, therefore, is essential reading for scholars, activists, political parties, who believe that ‘another world is possible.’”