Essays on Mentalities in Medieval India

The primary focus of most scholars in the field of medieval-Indian studies has been on economic history. Their judgement and estimate of medieval-Indian society are largely based on the data available on economic, social and politico-administrative institutions. In contrast, processes and phenomena that belong to the spheres of mentality, religion, culture, scientific knowledge – the very worldview of medieval Indians – have attracted little attention, and mostly as an appendix to the 'fundamental' themes. The typical historical treatise on the medieval period deals with political events, the economy (agriculture, crafts and trade), major social groups (their relations and life), the administrative system, taxation and, in the end, as a concession, 'a bit of culture' – brief descriptions of religious life, literature and the fine arts. In such a scheme, cultural and mental phenomena are a reflection of socio-economic processes and a secondary source of the latter.

This volume seeks to create an interest in the mental and behavioural aspects of medieval society in India and widen the area of research. The contributors to the volume belong to various schools of thought and follow different methodological approaches in their study of socio-economic and administrative development of medieval India. But when they discuss medieval Indian society from the viewpoint of ideas, mental patterns, and religious and cultural developments, they come to certain shared terms and allow their findings to complement each other at a somewhat broader level.

The papers presented here make a collective effort to denote several components of the medieval Indian 'mental programme'. First, that the medieval Indian state may be viewed not only in terms of control, exploitation, extraction and appropriation but also in terms of practices, ideas and ideologies that were closely linked (among other things) with religion. Second, that medieval Indian society had a specific understanding of the past and of social experience, and that history, individual or collective, was recorded and reproduced not just state facts, but also to create patterns for subsequent generations to follow. Third, a central feature of medieval society was a hierarchy – as embedded in the relations not only between social classes and groups but between individuals, and as encompassing even intimate feelings and desires. Further, that the intellectual worlds of medieval India, as revealed by literary, philosophical and grammatical treatises, which are the repositories of intellectual, spiritual and emotional experience, reflect the modes of dissemination and preservation of tradition as well as of dissent. Fourth, the presence of social and communal conflicts and mechanisms of conflict resolution were peculiar to medieval Indian society.

The editors of the volume believe that there is need for comparative studies, first, to realize the peculiarities of the medieval outlook in various regional cultures of India, and second, to study what is the worldview under research was specifically Indian and what was typically medieval and common to other pre-modern societies. They offer this volume as an invitation to their colleagues, of whatever school and methodological affiliation, to join in a search for new dimensions in medieval India research.

D.N. Jha is former Professor of History, University of Delhi. 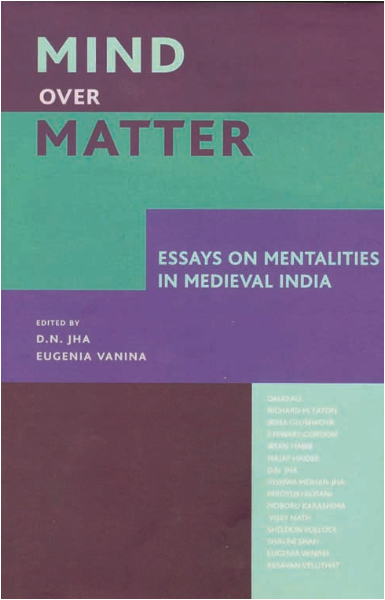