A People's History of India 25

This volume in the A People's History of India series gives a general account of Indian economy in the first century of British rule (1757–1857). It describes the changes in Indian economy brought about by the pressure for tribute, the British land settlements, and the triumph of free trade. In order to set these changes in a proper perspective, it begins by furnishing a survey of pre-colonial economic conditions. A notable feature of the book is its reference to how aspects of Indian economy were seen and interpreted by contemporary observers. This is accomplished partly by a rich collection of extracts from the sources. There are also special notes on current interpretations of eighteenth-century history, the nature of tribute or drain of wealth from India to England, and the scope and problems of historical demography. 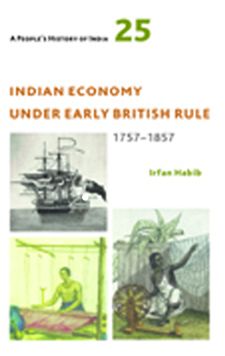 'This slim volume contains the distilled wisdom of a reputed historian who has a distinct approach to the study of the past and contemporary societies. Irfan Habib employs the materialistic interpretation of history and social dialectics to draw connections between seemingly unconnected and complex facts.'