The Ecological History of India

A People's History of India 36

Increasing interest has been shown in recent decades in matters relating to ecology, especially under the influence of the debate on climate change. The scope of ecology is, of course, much wider than that of climate alone, and involves in addition not only human relation with all species of animals and plants but also those conditions of human societies (material and intellectual) that influence our responses to the opportunities and challenges posed by nature. It is with this wider sense in mind that the history of ecology has been treated in this volume. Prepared under the scheme of A People’s History of India, this volume strives to conform to the approach, style and conventions followed by the preceding volumes of the series. Extensive extracts from sources have been provided; and there are special notes on ecology, climatology, zoo archaeology, natural history and forestry. The reader may find in the bibliographical note appended to each chapter a useful guide to further reading; the notes do not, however, aim at setting forth all the source material that has been explored for this book. The volume is addressed to the general reader as well as the student. A special effort is made to keep the style non-technical, without loss of accuracy. 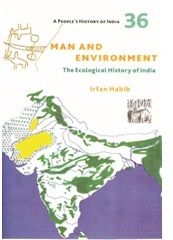 “The coverage of the evolution of the environment both by itself and in relation to the evolution of human beings in the prehistoric, Pliestocene and the current interglacial Holocene periods is very good and of value to the academic and student community… On balance this must be considered a scholarly and remarkable tome with historiography to the fore even in the context of ecology. The voluminous notes and bibliography at the end of each chapter bear testimony to this.”