The Making of Brahmanic Hegemony

History is under attack in India – not only from those who popularize a mythical version of the past with ill-concealed political objectives, but also from those who, through theoretical relativism that emphasizes cultural specificity and difference, re-orientalize the Orientals. Both approaches leave intact the hegemony of thought that underlies today’s social and economic inequalities.

This collection of essays focuses on the role of religion and mythology in making Brahmanical hegemony through the institutions of caste, gender and religious ideology. The aim is not to dismiss myths as false, distorted or bad history, but to examine the kind of reality they represent, to delve into the dynamics of their formation and their impact, and to account for elements of continuity and change. The collection features studies on caste-related social differentiation, drawing on sources from the history, society and polity of early India, as well as on the work of R.S. Sharma, the eminent historian of the period. It also includes studies on the gendered development of Brahmanical hegemony and studies on the historical valences of the various mythological incarnations in Vaishnava theology: Rama, Narasimha and Hayagriva.

Suvira Jaiswal is former Professor of History at Jawaharlal Nehru University, New Delhi. She did her MA in History from Allahabad University and PhD from Patna University under the supervision of Professor Ram Sharan Sharma. She began her teaching career at Patna University in 1962 and later, in 1971, joined the Centre for Historical Studies at Jawaharlal Nehru University, where she taught till her retirement in 1999. Her major publications include The Origin and Development of Vaishnavism (first edition 1967, enlarged second edition 1981) and Caste: Origin, Function and Dimensions of Change (1998). She was General President of the Andhra Pradesh History Congress in 2002 and General President of the Indian History Congress in 2007.

HISTORY | CASTE STUDIES |
Skip to the end of the images gallery 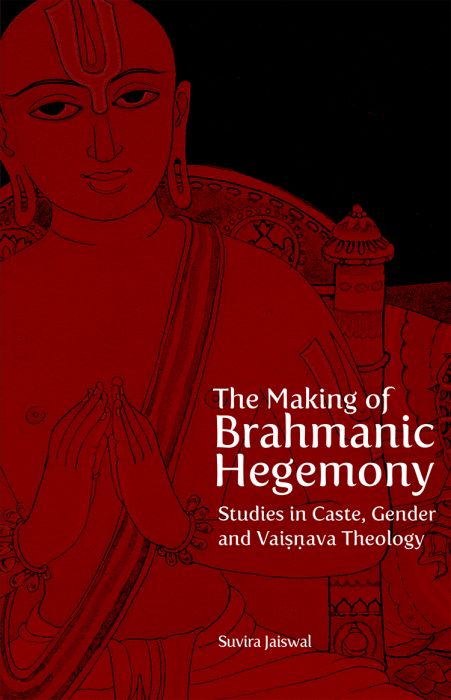 'In a time when the Indian polity and social imagination mark their presence as Hindu-centric, the liberal-multicultural analogy . . . falls short in explaining such communal assertion of the state and its people. It is in such a time we have a text like The Making of Brahmanic Hegemony, which becomes interventionist not only by critiquing the core of Hindutva ideology, but also by retaliating against the ideology which publicly maintained a liberal and secular imagination while practising a Brahmanical Hindu religion in the domain of the ‘private’[...] Suvira Jaiswal’s book is interventionist at many levels—it questions our imagination on concepts like caste, culture, or even gender, or to be precise, it seeks to redefine Brahmanism by taking recourse to a certain historical materialism.'