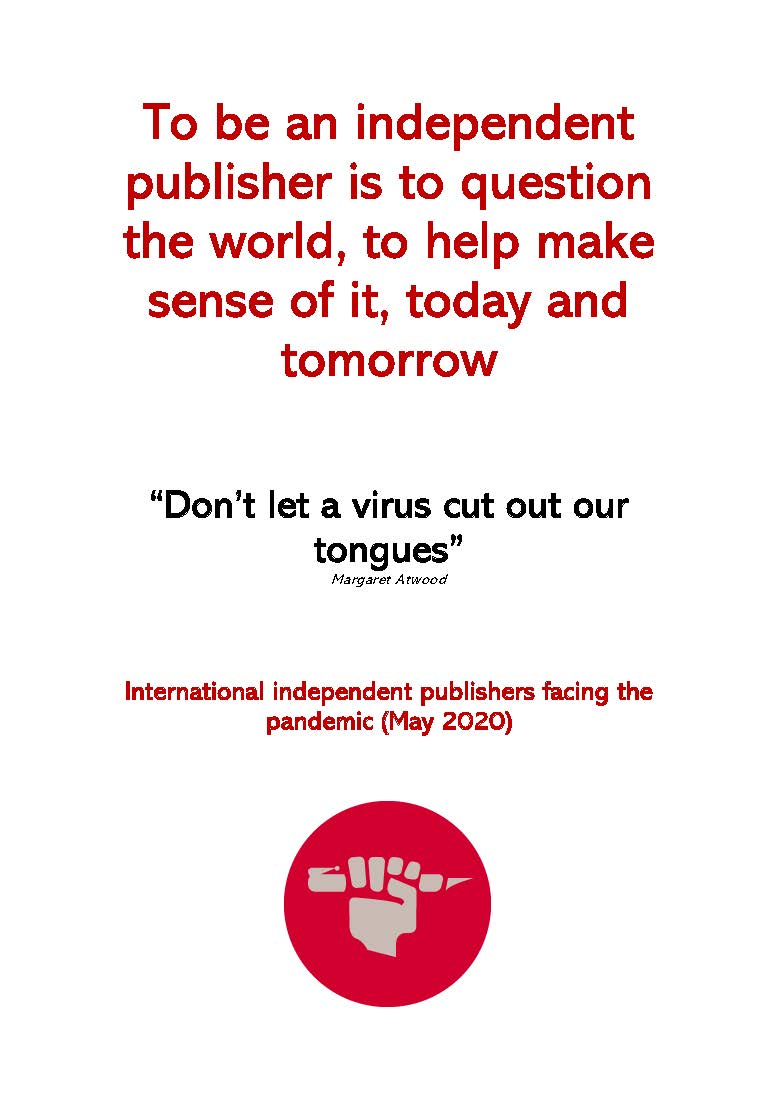 To be an independent publisher is to question the world, to help make sense of it, today and tomorrow

“Don’t let a virus cut out our tongues” .. Margaret Atwood

The International Alliance of Independent Publishers (a network of more than 750 publishing houses in 55 countries around the world) was created in 2002 in response to the movements towards concentration and commodification of publishing that André Schiffrin, among others, exposed. It was also in the 2000s that publishers in Latin America and Spain spoke of “bibliodiversidad” – bibliodiversity – a diversity and plurality of voices to be preserved, defended and carried. This network was built gradually – over a long period of time, a prerequisite for forging solid human relationships based on trust, friendship and solidarity. In 20 years, the Alliance has brought together publishing houses of all sizes (from 1 to over 50 employees), of all formats (cooperatives, companies, associations, etc.), from the four corners of the world1, around issues which, as we can see in the current context, remain relevant:

• Supporting the implementation of national, regional and international book policies

• Reaffirming and defending freedom and equity of expression

At a time when every country in the world is affected by the pandemic, we, as independent publishers around the world, are experiencing diverse health, social and economic situations. We are facing different realities, in different timeframes: immediate risks for some sections of the population (India, Madagascar, Indonesia...); a pandemic that strikes in contexts of already established political crisis (Haiti, Egypt, Syria...); the near absence or delayed implementation of public book policies (Cameroon, Gabon...); the resilience of independent publishing houses in the face of big corporations (Australia...).... While our contexts are diverse, our concerns remain collective: fragility of independent structures, uncertainty about the future, concern about possible abuses (surveillance society, pressure on employees, online teaching and learning, etc.).

We are in perpetual questioning, trying to understand our world: what to do, how, with whom, at what pace?

We need time to understand, to comprehend – which we had planned to do by 2021, as well as our “Rethink and Celebrate” Conference. REthink: to remain a conscious and creative actor, to act, in terms of ecology, social and solidarity economy, new approaches to readers, cooperative practices between professionals, freedom of publishing, fair speech...

• How will we continue our activities in the future? Will this period change the pace of production and the predatory and devastating economic behaviour of “Northern” countries in particular? Will booksellers finally have the time to unpack their boxes, to defend titles and activities over a long period of time?

• Will book actors experiment with so-called “alternatives”: will they join the alternatives already developed by peasants and artisans, for example direct selling?

• Will our relationships with readers be changed in this new world, by the use of digital technology but also by a transformed social context?

• In Africa, Latin America, the Arab world, Asia... how will professional actors recover in the absence of government support?

• How are losses calculated for independent publishers and how do we support independent publishers in the face of these impacts? Which institutions will take on this task? Will we be able to carry out our own surveys and together produce tools for measuring these losses but also support systems that will reveal the diversity of contexts?

• Will there be international book fairs? Can copyright transfers function remotely, exclusively virtually? Will the book fair model also be rethought? Is it also necessary to innovate or strengthen other models, on a more human scale, with more solidarity?

In the long-term, we can already call on international organisations and public authorities to draft public book policies

The absence or near absence of assistance and support from public authorities is a constant in many countries... and becomes blatant in crisis situations. The mapping of public book policies in Latin America and sub-Saharan Africa, which we began in 2018 and which is now online, is a case in point: we refer here to the proposals and recommendations that we made in 2014, at the origin of this mapping.

“In countries where national book policies are weak or non-existent, we appeal to governments to establish without delay policies which foster cultural development and the democratisation of books and reading. All the actors in the book chain need to be very closely involved in drawing up and applying such policies. They must reinforce the book industry in each country and help support local production, distribution, and access by all to books; in particular by establishing adequate regulatory and fiscal measures, and by providing more space for reading, especially public libraries. Such policies should encompass printed books as much as digital and should promote their complementarity. It is also crucial, in the context of globalisation, that national policies are carried over into regional and international policies. Such policies must allow books to circulate in an equitable manner and regulate the book market so that it is protected from the predatory acts of the large international e-tail and retail groups.”

We are thus fully in line with the declaration published on 20 April 2020 by several international organisations, inviting UN agencies, governments and other stakeholders to support culture in the context of the pandemic.

In the short term, we show our solidarity with readers, for whom digital platforms represent an opportunity to access books

Nevertheless, we would like to recall some of the setbacks and dangers of this “all-digital” approach:

• A generalised movement of concentration via predatory platforming (i.e. Amazon) which jeopardises independent bookstores in particular;

• An already existing threat that is increasingly menacing the diversity of content put online: in terms of bibliodiversity and the circulation of knowledge, heterodox and critical research strands and schools of thought developed in the “South” risk being more invisible and difficult to access, further away from public debates in which they are nonetheless indispensable;

i• The lack of financial, technical and human capacity enabling all publishing houses to digitise their catalogues: while more and more publishing houses have part of their catalogues digitised, many publishers are not equipped to do so. We thus reiterate what was proposed in 2014: it is urgent to set up funds to support the digitisation of publishing collections, especially for publishers in developing countries who hardly cope with this challenge (for financial, technical and human reasons). It is also important to stress to government authorities and banking institutions the need to promote secure local online payments, which are essential for the development of digital book trade (read more specific proposals here);

• Major environmental and social issues lie at the heart of the development of digital uses: predation of uses, exploitation of personal data and surveillance regimes, deleterious environmental impact of certain uses and online hosting... The technological solutionism advocated by major platforms is not our vision of the online solutions we would like to develop; we will have to feed our analyses on these sensitive topics.

We are in solidarity with all the actors of the book chain: national and regional associations; booksellers (we work with the AILF / International Association of Francophone Booksellers, so that bookshops are not left out of an “all-digital” movement in particular); creators; librarians; freelancers (graphic designers, designers, proof-readers...); printers... but also readers. We thank them warmly for their support, friendship and solidarity.

“Independent publishing is still thriving not only out of necessity but also because publishers have been able to mobilise themselves so as to be heard and to join forces. Today, more than ever, solidarity is vital.” Excerpt from the International Declaration of Independent Publishers 2014, Cape Town, (South Africa)